I discovered Cuponk today while shopping.  In its simplest form, it's a game where you try to land your ping-pong ball in a cup.  The trickier the shot, the better.  The basic game has been around for years, but it took some clever people at Hasbro to redesign, repackage, and market it as Cuponk.  For about $13, you get a couple of ping-pong balls, some trick cards, and a fancy cup with lights and cool graphics.  I have to admit, I considered buying it.  But then I had a better thought.  I walked over to the sports area and found a box of 36 ping-pong balls for $8.86.  I bought that instead.  I already had a plastic cup at home, and I figured my kids would have more fun designing and painting their own ping-pong balls.  And guess what . . . I was right.  We've spent the last hour sitting around painting ping-pong balls with magic markers and water color paints, which both worked fabulously.  I then sprayed them with a clear acrylic coat to protect the paintings.  And now . . . Let the games begin.

Here are some sample "designer" ping-pong balls, just to give you an idea of what you can do. 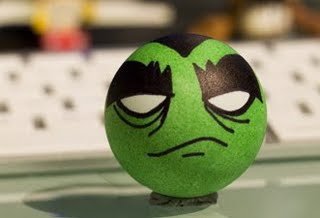 One more thought:  I'm considering using this game at school as a filler project.  I think it would be fun to design balls and then trade them or try to win your opponents ball in a bit of friendly competition.  With a little creativity, the possibilities are endless.  :)